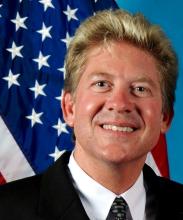 Anthony G. Kinkel, current president of Wichita Area Technical College in Kansas, has been recommended by Tennessee Board of Regents Chancellor John Morgan as the next president to lead Motlow State Community College.

The recommendation will go before the Board during a special called meeting on Wednesday, May 27, at 9:30 a.m. CDT in the TBR System Office in Nashville. The Board will also hear recommendations for new leaders at two other community colleges and the Tennessee Colleges of Applied Technology at Covington and Ripley.

His variety of experience, including leadership at several community colleges and at the system level, will make him an effective leader for Motlow, according to Morgan.

“Dr. Kinkel is a leader with a commitment to service, to helping students reach their potential, and to understanding the workforce and education needs of the communities he serves,” said Morgan. “In addition to his previous work as a college president, he will bring teaching, administrative and policy making experience to the role, a distinguishing combination. We expect him to carry on the momentum of the campus and continue its progress in the Drive to 55 for Tennessee.”

Kinkel was chosen to lead Wichita Area Technical College, one of the largest two-year colleges in the Kansas Board of Regents System, in December 2010. During his tenure, enrollment has grown 15 percent, the college’s National Center for Aviation Training was selected by the National Association of Manufacturing to develop the national standards in aviation curriculum, the number of students earning a credential doubled, and job placement increased each year.

Kinkel served as chancellor at the University of Arkansas Community College at Batesville from 2004 to 2007 after leading Maryland’s community colleges as state director for the Maryland Association of Community Colleges. He was also the dean of general education at Northwest Technical College and previously taught political science at Central Lakes Community College in Minnesota.

Kinkel’s early career was in public service, having been elected at age 24 to the Minnesota House of Representatives, where he served 12 years. He was elected to the Minnesota Senate from 1999-2002. He is married to Melva Kinkel, and they have two sons, Bret, 28, and Kellen, 14.

His complete application materials are available at http://tinyurl.com/AGKinkel.

Motlow State’s current president, MaryLou Apple, previously announced her plan to retire on June 30 after leading the college for nine years. Kinkel will begin work at Motlow on August 1.

Motlow State Community College is a public, multi-campus college offering associate degrees, certificates and flexible learning pathways. The main campus is located in Moore County with learning centers in Fayetteville, McMinnville and Smyrna, a teaching site in Sparta and a partnership in Shelbyville at the Middle Tennessee Education Center. It is a member of Tennessee’s Community Colleges.

The May 27 meeting is open to the public and the press. Dial-in access will be available. Those wishing to attend or participate should contact Sonja Mason at sonja.mason@tbr.edu or 615-366-3927 before 4:30 p.m. CDT May 26 so building security clearance or phone access can be arranged. Anyone with a disability who wishes to participate should use the same contact to request services needed to facilitate attendance. Contact may be made in person, by writing, by e-mail, by telephone or otherwise.