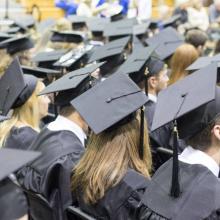 The Tennessee Board of Regents today approved a 25 percent increase in the Drive to 55 targets at its 13 community colleges – increasing the number of degree recipients needed to meet the targets to 134,055 by 2025.

The new targets represent an increase of 26,667 community college graduates, from the 107,388 graduates that would have been needed during that same time period under the previous targets set in 2015.

The Drive to 55 was proposed by Governor Bill Haslam in 2013 as a policy initiative to ensure that at least 55 percent of working-age Tennesseans have some level of college degree or other postsecondary credential by the year 2025, to meet the workforce requirements at the time. The targeted numbers of degree recipients needed by each sector of Tennessee’s higher education institutions – including the state’s public colleges and universities – to meet that goal were last revised in 2015 as part the of the Tennessee Higher Education Commission’s Master Plan for higher education.

The share of the targets previously established for the College System of Tennessee as a sector was 25.4 percent of the overall number to be produced by all sectors, and the specific share for the community colleges was 15.1 percent – the 107,388 figure above. The share allotted to the System’s 27 Tennessee Colleges of Applied Technology is 10.3 percent, which is unchanged by today’s Board of Regents action.

The College System, governed by the Board of Regents, has consistently exceeded the previous targets set for it, prompting Governor Haslam to engage the System’s staff in discussion this summer about raising the targets. Those discussions led to the decision to increase the community colleges’ degree-recipient targets by 25 percent, which raises the College System’s sector share to 28.3 percent and the community colleges specific share to 18 percent.

“The conversation started with the community colleges, given the success we’ve had, and we hope it expands to the Colleges of Applied Technology next, and eventually to the other sectors,” TBR Executive Vice Chancellor Russ Deaton told Board members. “These are not credential counts – the number of degrees awarded – but individual people earning those degrees between now and 2025.”

Deaton told the Board that the new targets are “aggressive but we think are feasible. And based on what we see today and over the last few years, we believe it’s one we can achieve.”

Chancellor Flora W. Tydings agreed. “The governor recognized the great work we’ve done and to prove his confidence in us, he said why don’t we raise the bar. The community college presidents agreed this was a good idea. So in collaboration with the governor’s staff and THEC, we developed our new degree targets, which are 25 percent higher than the 2015 targets. I know that we will be successful,” she told the Board Friday.

The Board’s approval also sets specific targets for each community college and requires System staff to regularly update the Board on the status.

That action occurred at the Board’s Fall Quarterly Meeting, held Thursday and Friday at Dyersburg State Community College, which is celebrating its 50th anniversary this academic year.

In other action Friday, the Board approved a request by Walters State Community College to rename its new Greeneville/Greene County Campus as the Walters State Niswonger Campus, in honor of Greeneville entrepreneur and philanthropist Scott Niswonger.

Niswonger is a longtime supporter of education and students – at all levels – and he is a previous recipient of the Regents Award for Excellence in Philanthropy for his many years of support to Walters State and East Tennessee State University and the students of the region.

He founded The Niswonger Foundation in 2001. The Foundation’s mission is to create opportunities for individual and regional growth through educational programs, scholarships, and other charitable activities. The foundation has sent scores of student-scholars to colleges and universities across the U.S.

Complete Board agendas and materials and archived video of are online at: https://www.tbr.edu/board/september-quarterly-board-meeting-0.