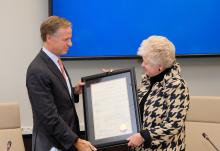 The Tennessee Board of Regents today named the building housing the Tennessee College of Applied Technology Murfreesboro’s Smyrna Campus and Nissan Training Center as “The Bill Haslam Center” in honor of Gov. Bill Haslam.

The Board also approved a resolution summarizing Gov. Haslam’s work and accomplishments for higher education and Tennessee students – including the groundbreaking Tennessee Promise and Tennessee Reconnect programs – and expressing gratitude to him for his service as both Governor and chair of the Board of Regents.

The proposal to name the TCAT Murfreesboro/Smyrna Campus building in the governor’s honor originated with a nine-member naming committee at the college composed of faculty and staff of both the college and Nissan, which shares the facility. Following Board policy, the naming committee cited the governor’s vision for the building – delivered in his 2013 State of the State Address, when he proposed a $35 million appropriation to help fund it – as a public-private partnership of education and industry.

TCAT Murfreesboro President Jon Mandrell presented the proposal to the Board, and Dan Caldwell, senior manager of U.S. manufacturing training at Nissan Group of North America, also spoke in favor. The naming committee’s recommendation cited “Governor Haslam’s steadfast commitment to advancing career and technical education” and that he “was instrumental in the creation of the Smyrna Campus and Nissan Training Center.”

Gov. Haslam participated in the groundbreaking for the building in December 2014 and in its official opening in March 2017.

The Board unanimously approved the naming, and the separate resolution honoring Gov. Haslam’s service.

In other action during its quarterly meeting today, the Board of Regents heard a report on the rollout of its new warranty for graduates of technical programs. The warranty program, approved by the Board of Regents at its December 2017 meeting, provides for the re-training – without charge – of graduates of programs awarding technical certificates and Associate of Applied Science degrees who cannot perform a specific skill or competency listed in the program catalogue for up to one year after graduation.

The warranty went into effect with students who entered technical programs this fall. Those in some short-term technical certificate programs are graduating this month and will be the first covered by the warranty. At graduation, they will be given warranty cards and letters detailing the policy and how their employers may file claims.

In other action, the Board