Board of Regents meets, hears reports from Tennessee Promise students, approves other measures 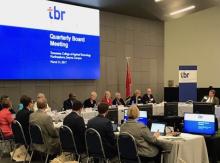 The Tennessee Board of Regents appointed a new director at the Tennessee College of Applied Technology in Morristown, heard a report from students on the Tennessee Promise scholarship program, approved changes in some student incidental fees requested by colleges and acted on other items on the agenda in its regular quarterly meeting Friday, March 31.

After a ribbon-cutting ceremony and tours of the facility, the Board convened its meeting in the college’s auditorium. Board Vice Chair Emily Reynolds of Nashville said the new campus will “make a fundamental difference in the lives of the people coming through these doors.” She also noted that the meeting made history because it was the first time the TBR System’s Colleges of Applied Technology hosted a board meeting. “It won’t be the last time,” she said. The Middle Tennessee TCATs jointly hosted the session on the Smyrna campus.

The 162,000-square-foot, $45.75 million state-owned facility welcomed its first group of students in January. The campus is a public-private partnership of the State of Tennessee, the Tennessee Board of Regents and Nissan. The College of Applied Technology offers technology certificate programs in several fields to any Tennessee student. The facility’s Nissan Training Center, operated by Nissan, offers advanced manufacturing and management training for employees and prospective employees of Nissan and its suppliers.

Governor Haslam proposed the joint-use facility in his 2013 State of the State address and the Tennessee General Assembly approved a $35.4 million appropriation in the 2013-14 state budget. Nissan is paying $1.9 million through a lease agreement. The balance of the funding for its state-of-the-art training equipment and machinery came through internal TBR funding, grants from state and federal agencies, and donations from Nissan and its vendors.

During its meeting, the Board approved Chancellor Tydings’ recommendation for the appointment of Jerry S. Young as director of the College of Applied Technology at Morristown, effective April 1. Young, who has been director of TCAT-Crossville since 2014, began his career with the TBR System in 1988 as an electronics technology instructor at the Crossville campus. He served as assistant director for nine years. He holds a bachelor of science degree from Excelsior College in Albany, N.Y., and a master of arts from the University of the Cumberlands in Williamsburg, Ky.

Regent Danni Varlan of Knoxville, who chaired a search advisory committee for the new director, said there were 32 applicants for the position.

The board heard a presentation on the impacts of the Tennessee Promise scholarship program by Student Regent Joshua Spurling, Columbia State Community College student Kendal Franks and Travis France, a student at the College of Applied Technology – Morristown. Regent Spurling is completing his associate degree in business administration at Roane State Community College and will pursue a degree in management and international business at the University of Tennessee.

All three are enrolled in the Tennessee Promise, which provides two years of community or technical college free of tuition and mandatory fees.  Regent Spurling said the program’s impacts have been widespread, leading to its first cohort of students graduating from their two-year programs this spring. “However, as we move forward and our third cohort prepares to begin their first semester, it’s now more important than ever to keep working to improve Promise and what it has to offer,” he said. He recommended continued work to ensure smooth transitions among colleges and universities, including making sure that credit earned by students through Transfer Pathways will transfer.

In other action, the Board:

Archived video of the Board meeting is available for viewing, along with Board material containing complete details of agenda items, are here: https://www.tbr.edu/board/march-2017-committees-meeting