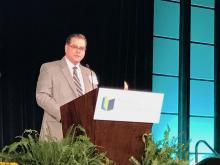 The Nashville Public Education Foundation launched its Hall of Fame in 2005 to honor those who have made an impact on the city’s public school system and community. Since its creation, 59 people have been inducted and Regent Hatch is the second member of the Tennessee Board of Regents in the Hall of Fame. Board Vice Chair Emily J. Reynolds was inducted in 2012. Both she and Hatch are graduates of Hillsboro High School.

Honorees are selected from community nominations. This year, nearly 100 civic and community leaders were nominated.

Hatch is the executive vice president and general manager of Skanska USA’s Midwest Region. At Skanska, one of the nation’s largest construction and development companies, he was instrumental in developing the company’s Diversity Business Program and is a founding member of Skanska’s National Diversity and Inclusion Council. In his 44 years in the construction industry, he has been involved in over 200 projects in 20 states totaling over $6.6 billion.

He was appointed to the Tennessee Board of Regents earlier this year, representing the 7th Congressional District. Hatch also serves on the boards of several other organizations, including the YWCA of Middle Tennessee and Conexión Américas, and on Nashville Mayor Megan Barry’s Gender Equity Council.

After graduating from Hillsboro High School, he attended Nashville State Community College – a campus of the College System of Tennessee, governed by the Board of Regents – and Auburn University, where he earned his Bachelor of Science in building construction.

“Nashville is a better place because of each of these inductees,” said Wanda Lyle, Nashville Public Education Foundation vice chair and general manager of Nashville’s UBS Business Solutions Center. “The three Distinguished Alumni honorees are true Metro Nashville Public Schools success stories. I am delighted to honor their achievements at this year’s awards luncheon.”