Military veterans at Tennessee’s community and technical colleges are being honored in Veterans Day activities this week. And one veteran at each college will be awarded the Chancellor’s Commendation for Military Veterans.

Tennessee Board of Regents (TBR) Chancellor Flora W. Tydings established the commendation last year as a system-level recognition to honor the service, bravery and sacrifices of veterans in campus communities. The commendations are presented during Veterans Day ceremonies and observances traditionally conducted by TBR colleges.

The Chancellor’s Commendation is conferred in the form of a specially designed Challenge Coin. Challenge coins are a tradition in all branches of the military, signifying special achievement, excellence, hard work, unit pride, respect and esprit de corps. 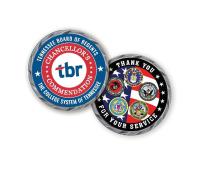 Recipients of the Chancellor’s Commendation were nominated by their college presidents. This year’s recipients include 14 Soldiers, 9 Sailors, 7 Airmen, 6 Marines and 1 Coast Guardsman. “These 37 men and women represent the spirit and values of our colleges – student success, academic excellence, courage in adversity, and service to campus and community – and the highest ideals of military service,” Tydings said.

“All military personnel take an oath in which they solemnly swear or affirm to support and defend the Constitution of the United States against all enemies. That defense of our great nation requires tremendous sacrifice. Our college communities are strengthened by the presence, experience and perspective of veterans and active-duty military personnel – as students, faculty, staff and alumni. They are an important part of the great diversity of people and backgrounds on our campuses. We’re glad they’re here, and we’re privileged to honor their service – not only on Veterans Day but all year long,” Tydings said.

Honoring veterans isn’t a once-a-year occurrence.  Veterans receive ongoing services and support on campuses across the College System of Tennessee, governed by the Tennessee Board of Regents, to help them make the transition to college, achieve academic success and earn their degrees.

In addition, the Tennessee College of Applied Technology at Dickson and its Clarksville Campus became the first TCAT in the system to earn VETS Campus status, in August. Although all TBR colleges provide services and support for veterans, the goal is for all to achieve VETS Campus certification.

“Our college is honored to serve the veterans who have served our country so well,” said TCAT Dickson President Arrita Summers.  “This designation is representative of our ongoing efforts to support and equip veterans in every way that we can.”

To earn VETS Campus certification, an institution must prioritize outreach to veterans and successfully deliver services necessary to create a supportive environment where student veterans can prosper while pursuing their education. The Tennessee Higher Education Commission has certified 28 colleges and universities as VETS Campuses. Certification is reviewed annually.

“The Tennessee Board of Regents is fully committed to the academic success of our veterans. The faculty, professional staff and senior leaders on all campuses and at the system office are dedicated to serving all veterans and military personnel, who bring a wealth of training and experience to our institutions,” said Dr. Robert M. Denn, associate vice chancellor for academic affairs and veterans service officer at TBR.

One of the first Chancellor’s Commendation presentations of 2021 occurred at Volunteer State Community College – to college staff member Tiffany Zwart, who served in the U.S. Marine Corps as an aviation electronics technician and who began her college career as a Vol State student in 2007. After earning a Bachelor of Science degree at Middle Tennessee State University and a Master of Science at Oklahoma State University, she returned to Vol State as coordinator of student support in the Office of Student Engagement & Support. She is also co-advisor for the Veterans Club.

Vol State President Orinthia Montague presented the commendation to Zwart in a ceremony at the Gallatin campus.

Recipients of the 2021 Chancellor’s Commendation for Military Veterans, their association with the college, and their military branch of service are:

Information on resources for veterans interested in pursuing their education is available here.

Information on financial assistance for veterans is available here.