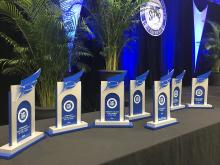 The College System of Tennessee honored its outstanding students, faculty, staff and college of the year during the first Statewide Outstanding Achievement Recognition (SOAR) celebration Wednesday night in Nashville.

After weeks of college- and regional-level judging that produced 18 finalists, the Tennessee Board of Regents presented SOAR’s six individual student, faculty and staff awards during the inaugural SOAR Awards Dinner.  More than 300 students, faculty, presidents and staff from the system’s 13 Community Colleges and 27 Tennessee Colleges of Applied Technology, state legislators, public officials, philanthropists and other guests attended the event at the DoubleTree Hotel Downtown Nashville.

Each of the award winners received an impressive SOAR trophy. All finalists received plaques at a Finalists Dinner Tuesday night commemorating their achievements. Cleveland State will be the first to have its name engraved on the College Cup that it will display on campus until next year’s SOAR awards.

The Board and the Foundation of the College System of Tennessee also presented two SOAR Philanthropist of the Year Awards – to AT&T Tennessee, accepted by ATT Tennessee President Joelle Phillips, and to the family of the late James Berdet Brown, who created the James Berdet Brown Memorial Scholarship in his memory. The award was presented to Mr. Brown’s sister, Kathy-Jo Brown Hayden and her husband Lee Hayden, who founded the scholarship after Mr. Brown’s death in 2015, Mr. Brown’s mother, Joan Brown, and his other sister, Joan Arrow.

Donations by AT&T, through its signature philanthropic initiative AT&T Aspire, have enhanced computer information technology training programs for students in the community and technical colleges, including the purchase of new wireless networking equipment used to teach infrastructure design, security and planning.

The James Berdet Brown Memorial Scholarship has assisted TCAT students across the state for nearly four years. Mr. Brown was an unemployment claims agent with the Tennessee Department of Labor and Workforce Development. His family established the scholarship to carry on his legacy of encouraging his clients and others, and helping those in need improve their circumstances.

The SOAR Volunteer of the Year Award was presented to Board of Regents Vice Chair Emily J. Reynolds, in recognition of her nine years of volunteer public service on the board -- including the last seven as vice chair -- and as a mentor to Tennessee Promise students.

Nikki Burdine, co-anchor of WKRN-TV’s Good Morning Nashville, was master of ceremonies of the Awards Dinner. “This inaugural Statewide Outstanding Achievement and Recognition, or SOAR, Awards event brings us all together from across our great state to honor the best and brightest Tennesseans in two-year higher education,” she told the attendees.

Tennessee Higher Education Commission Executive Director Mike Krause was keynote speaker. Krause, one of the architects of the Tennessee Promise and Tennessee Reconnect programs, said there’s a national discussion underway about what constitutes an “elite” education. “We re-define what ‘elite’ means. To me, elite is a 90 percent job placement rate, which is every TCAT in this room. The Tennessee arc right now represents excellence. Roads of opportunity don’t just flow out of Yale; they flow out of welding classrooms too!”

The Awards Dinner was the culmination of two days of activities that opened Tuesday morning with final interviews and judging for the SOAR individual awards by a distinguished panel of judges, followed by tours of the new Tennessee State Museum, and a Finalists Dinner for them, their guests and their student advisors and college presidents.

Wednesday’s activities also included the annual TBR Day on the Hill and the Student Honors Luncheon, which honored members of the Phi Theta Kappa All-Tennessee Academic Team and the National Technical Honor Society. Phi Theta Kappa is the national honorary society for outstanding community college students. The National Technical Honor Society is the honorary society for the top career and technical education students.

At TBR Day on the Hill,  SOAR finalists, Tennessee SkillsUSA officers, student government presidents and college presidents from across the system toured the State Capitol and Cordell Hull Building, observed House and Senate committee meetings and met with state legislators.

All 18 student, faculty and staff finalists were introduced on stage during the Wednesday night ceremonies. TBR Chancellor Flora W. Tydings congratulated all for their hard work and achievement – particularly the students. “Our students are why we are gathered here tonight. Students are why we exist – why we do what we do every day. Our mission is straightforward: student success and workforce development,” she said.

“I’m proud to be a part of a public higher education system that is open to everyone who wants to come, study, work hard and learn. Whether your goal is to train for a career in a year, or to continue your studies at a university, we are here to help you achieve your dream,” the chancellor said.

Reynolds presented the Student of the Year awards. Both students are adult learners who returned to school through the new Tennessee Reconnect program. Fry said that he plans to continue his education at the University of Tennessee Chattanooga and hopes to become a college counselor and success coach, because his counselors at Chattanooga State have been so helpful to him. Varney also plans to pursue a degree in electrical engineering after finishing her program at TCAT Shelbyville and work in the power generation field.

The other two College of the Year finalists were Pellissippi State Community College and Tennessee College of Applied Technology Elizabethton. All three colleges advanced through a review of institutional data on three key metrics: performance improvement, overcoming obstacles and program expansion.

Tydings, who presented the award to Cleveland State President Bill Seymour, said the Cleveland State has not only grown its enrollment but has also had significant improvements in retention and graduation rates, particularly for minority students, helping to close equity gaps. The college increased the number of Associate degrees and certificates awarded by 10 percent. “Notably, Cleveland State has grown its Honors program from 14 to 100 students in three years and is the only TBR college with an Honors articulation agreement with the University of Tennessee Knoxville,” the chancellor said.

Accepting the award, Seymour said, “Awards like this don’t just happen. Our faculty and staff have worked tirelessly for years. Dedication to pathways and college completion has permeated our campus for years. We have changed our culture to make sure we are totally focused on student success. This award goes to over 300 people back in Cleveland, Tennessee.”

The 18 finalists for the individual awards advanced through college- and regional-level competitions in East, Middle and West Tennessee to reach Tuesday’s final judging by a distinguished panel of judges.  The other finalists, announced last week, were: