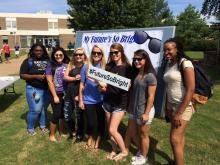 Tennessee’s community colleges are welcoming new and returning Tennessee Promise students to their campuses with special celebrations starting this week.

The 2016-17 academic year now underway is the second year of the Tennessee Promise scholarship program, which provides two years free of tuition and most fees at the state’s community colleges and Tennessee Colleges of Applied Technology (TCATs) or an equivalent dollar amount at the state’s universities. New high school graduates, starting with the high school class of 2015, are eligible. The colleges of applied technology start their new terms in September and also plan special events for their Tennessee Promise and Tennessee Reconnect students.

Gov. Bill Haslam will speak at the Tennessee Promise/Welcome Week event today at Columbia State Community College’s Williamson County campus, 1228 Liberty Pike in Franklin. The event for all students is scheduled from 11 a.m. to 1 p.m. CDT on the campus’s courtyard. The Governor is scheduled to speak at 12:20 p.m.

The Tennessee Promise/Welcome Week activities have a “My Future’s So Bright” theme, with free sunglasses for students. Students can write messages on large banners about their hopes for the future and what they want to do after graduating. Some colleges will have a “future selfie” photo-op spot where students can photograph themselves and each other wearing graduation caps or with equipment associated with their future careers, for posting on their favorite social media.

The new school year marks the return of the first class of TN Promise students for their second year, and the arrival of new students from the high school Class of 2016.  The separate Tennessee Reconnect program is for eligible Tennesseans who don’t qualify for TN Promise to return to school to pursue certificates, diplomas and degrees at the TCATs.

Local state legislators, community leaders and others have been invited to help students celebrate at the events.

“We want to make sure that Promise and Reconnect students know how much we appreciate them and the work they’ve done to get this far,” TBR Chancellor David Gregory said. “We all want them to succeed, and making them feel at home on campus and ensuring that they know help is available simply by asking for it are the first steps on the path to success.”

Tennessee Promise was proposed by Gov. Bill Haslam and approved by the Tennessee General Assembly in 2014 as both a scholarship and mentoring program focused on increasing college attendance. It is a key component of the state’s Drive to 55 initiative aimed at increasing the percentage of working-age Tennesseans with college degrees and certificates to 55 percent by 2025. Promise provides students with a last-dollar scholarship, meaning that it covers tuition and fees not covered by the federal Pell Grant, the state’s Hope Scholarship and other financial aid.

Nearly 16,300 students enrolled in the first Tennessee Promise class in fall 2015, contributing to a 10.1 percent increase in first-time freshman enrollment in Tennessee public higher education in the fall of 2015 over the previous year. Higher education officials will determine the number of Tennessee Promise students attending classes this fall after the withdrawal deadline in September.

Although removing the financial burden is important, other Tennessee Promise requirements are also critical to student success -- particularly for first-generation and minority students underrepresented in college – including the mentoring that each student receives as they navigate the college admissions and financial aid process. Each student who signs up for Tennessee Promise is assigned a mentor, most of whom are volunteers. Students must also perform eight hours of community service prior to each semester they receive TN Promise financial aid.