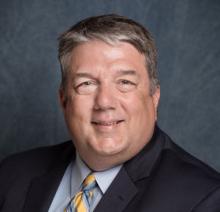 Cris Perkins has been appointed assistant vice chancellor for strategic advancement at the College System of Tennessee, assuming responsibility for system-level development, advancement and fundraising to bolster its Student Success and Workforce Development mission.

Perkins’ work also will support the development activities at the College System’s 13 community colleges and 27 Tennessee Colleges of Applied Technology. The system is governed by the Tennessee Board of Regents.

Perkins reports to Vice Chancellor for External Affairs Dr. Kimberly McCormick and assists in leading the system’s outward-facing activities as a senior leader in the Office of External Affairs.

He will be developing strategic relationships with community partners, crafting and leading the development of capital campaigns, helping develop corporate and public relations strategic plans, and building general partnerships that benefit the system and its students. He is also assisting the vice chancellor in the creation and development of a systemwide annual conference and awards ceremony to recognize outstanding students and faculty, planned for launch next March.

“We’re privileged to have Cris on board in this critical new position given his knowledge, experience and leadership in strategic advancement and development,” said Tennessee Board of Regents Chancellor Flora W. Tydings. “Cris will be working at the system level to support the work our colleges do in raising much-needed funding to offset the burden on students and their parents, including potential new partnership opportunities with state- and national-level donors.”

Perkins comes to the College System of Tennessee after spending the past 2½ years as the athletics development officer at the University of North Georgia where, among many other achievements, he originated a capital campaign to secure $2.5 million in private support for UNG’s Convocation Center that is now the home to their men’s and women’s basketball teams.

From 2002 to 2016, Perkins served as executive director of advancement at two colleges in the Technical College System of Georgia and as director of advancement at one. At all three, he worked with donors to grow endowments, including doubling the endowment for the Bagwell Emergency Scholarship Fund at Lanier Technical College. He secured revenue streams from multiple corporate partners, and worked closely with foundations to win scholarship funding for college students and adults needing GEDs and extra support to move into higher education. He has also worked as a sportswriter and public relations director.

A native of Franklin, Tenn., Perkins earned a Bachelor of Arts degree in journalism from Nicholls State University in Louisiana. He is married to the former Sharon Brander; they have two children, Katie and Nick.