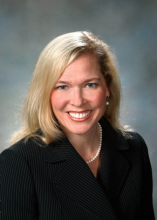 The Tennessee Board of Regents today appointed Dr. Rebecca Ashford as the next president of Chattanooga State Community College, effective July 10.

Ashford has been vice president of student affairs at Pellissippi State Community College in Knoxville since July 2008. She began her career in higher education in 1997 as a student advisor at what was then Brevard Community College in Florida, and has held executive-level appointments at three community colleges since 2000.

The board met in a special called meeting, by telephone conference call, to receive and consider Chancellor Flora W. Tydings’ recommendation of Ashford for the presidency. Board members voted unanimously to accept the recommendation and appoint Ashford as the new president.

“I am honored and humbled to be selected as the next president of Chattanooga State Community College,” Ashford said. “I look forward to working with the faculty and staff to build upon the college's successes in meeting the community's educational and workforce needs.”

The board also approved a new process for selecting nominees for faculty and student members of the Board of Regents – a change made necessary by the FOCUS (Focus on College and University Success) Act of 2016. Prior to the FOCUS Act, faculty and student regents rotated among the TBR system’s universities and community colleges.

The new law removed the six former TBR universities from the board’s governance, effective when each of the universities’ new boards of trustees convened for the first time in March and April. In addition, the state legislature this year approved a new law adding a non-voting faculty regent to the board, who will serve for a year before moving into the voting faculty regent role the second year. The 2017 law also made a minor administrative change in the process for selecting student regents.

The new policy provides that the faculty and student regents will come from the community colleges and colleges of applied technology, and sets out a process for how they rotate.

Ashford was one of four finalists for the Chattanooga State presidency selected by a search advisory committee out of 63 original candidates. The finalists spent a day on the campus last month, separately participating in meetings and open forums with faculty, staff, students, alumni and the public. Ashford’s campus visit was April 19; her curriculum vitae and the archived video of her open forum are available on the TBR website at: https://www.tbr.edu/hr/executivesearches/president-chattanooga-state-com...

Ashford holds a Doctor of Education in Educational Leadership degree, a Master of Arts in Higher Education Student Personnel and a Bachelor of Science in English Education, all from the University of Central Florida, and an Associate in Arts degree from Brevard Community College, now Eastern Florida State College.

She was a student advisor at Brevard from 1997 to 1999 and student development specialist from 1999 to 2000. She held three separate deanships at Brevard: dean of educational services from 2000 to 2003, dean of student services from 2003 to 2005 and dean of enrollment management in 2005. She then served as vice president for student affairs at Broome Community College in Binghamton, N.Y., from 2006 through June 2008, when she was appointed vice president of student affairs at Pellissippi State in Knoxville.

Tydings interviewed all four finalists, then, after their campus visits, gathered feedback from search committee members and the forums and meetings to select one candidate for nomination to the board. A form on the TBR website allowed anyone to submit comments and views on the candidates.

“This search is especially close to me because the new president is my successor,” the chancellor told the board. Tydings served as president of Chattanooga State in from 2015 until she assumed her new role as chancellor of the Board of Regents system on Feb. 1 of this year. “During my tenure at Chattanooga State, I came to admire and appreciate the students, staff and faculty for their devotion to the institution.

“Chattanooga State contributes greatly to the economy and welfare in that community. I know the person being recommended today will continue the progress that has been made and will strive to keep the momentum going for student success. After careful review and consideration, I am pleased to recommend to you Dr. Rebecca Ashford as the next president of Chattanooga State Community College.”

The chancellor also recognized the members of the board who served on the search advisory committee: Regent Tom Griscom, who chaired the committee, Regents Danni Varlan and Thomas A.H. White, and former Regent Howard Roddy. She thanked the other 17 members of the search committee, which included representatives of faculty, staff, students, alumni and the community at large.

Regent Griscom, who made the motion to appoint Ashford, noted that she has an associate degree and began college as a student at a community college.  He also thanked Debbie Adams, the college’s vice president of student affairs and workforce development, for serving as interim president during the search and until Ashford’s arrival on campus in July.

The board approved the Chattanooga State search criteria and appointed members of the Presidential Search Advisory Committee on Jan. 27. The committee's charge was to identify and interview candidates and then narrow the original pool of applicants to three to five finalists.

Chattanooga State Community College is a comprehensive, public two-year postsecondary institution whose primary service area includes six counties in Southeast Tennessee. It has over 8,500 credit students and over 700 non-credit students. The college employs approximately 640 full-time employees, including 238 full-time faculty members, and operates on a budget of $95 million.