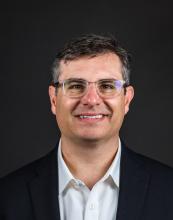 McMillian, currently executive director of economic and workforce development at Northeast State Community College, will assume his new duties May 9, 2022 to help lead development of the new campus and its programs and curriculum. The new $40 million campus is being built adjacent to Ford’s Blue Oval City electric vehicle assembly plant also under construction at the Megasite. The campus will be the primary training center for Ford and its suppliers who are expected to locate nearby, as well as existing industries throughout the area.

TCAT Jackson President Jeff Sisk said McMillian was selected following a national search for the best leader for the new campus. “Mr. McMillian has in-depth experience in career and technical education, economic and workforce development, and in large-scale industry – all of which will help us stand up this new campus. He will be the on-ground point person to work with Ford as we both build at the Megasite,” Dr. Sisk said.

After earning his AAS degree at Northeast, he began his career as a service technician before transitioning into manufacturing in North Carolina. Following his two-year manufacturing role in North Carolina as a production technician and technical group leader, he joined Eastman Chemical Company in Kingsport, Tenn., in 2005. During his 13-year tenure at Eastman, he completed Eastman’s welding and millwright apprenticeship programs, served in various roles at the company with increasing leadership responsibilities, and worked as an adjunct faculty member at Northeast State for three years.

TCAT Jackson and the new Blue Oval City Campus are part of the state’s public community and technical college system – The College System of Tennessee, governed by the Tennessee Board of Regents (TBR).

The new campus is part of the incentive package the State of Tennessee offered the partnership between Ford Motor Company and battery maker SK Innovation, which announced plans last September to invest $5.6 billion in a state-of-the-art manufacturing facility for Ford’s next generation of all-electric trucks. The project is expected to create 5,800 new jobs. Production is projected to begin in 2025.

TCAT Jackson and TBR officials are working closely with Ford to develop curriculums and training programs that meet the company’s needs.

“The Blue Oval City Campus will house customized training programs that are critical to the success of not only Ford but also the suppliers that will locate in the area to support Ford’s operations. But it’s also important for residents of the area to know that the new campus is a state-owned, public institution that will benefit students regardless of where they plan to go to work, as well as existing industries and manufacturers, by providing other world-class for-credit career and technical education programs,” said Tennessee Board of Regents Chancellor Flora W. Tydings.

“Heath McMillian has demonstrated through his work at Northeast and at one of Tennessee’s largest employers that he can help us build the kind of high-quality institution that this huge investment in Tennessee’s future requires,” Dr. Tydings said.