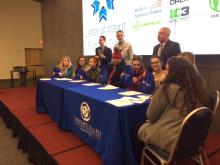 Nearly 2,000 high school students across Tennessee took their seats Thursday at tables festooned with school colors to sign their college letters of intent. They donned hats and were given t-shirts bearing their new schools’ logos.

Parents, siblings and other relatives, school officials, and business and civic leaders watched and applauded.

It was a scene replayed at most of the 27 Tennessee Colleges of Applied Technology -- and at technical colleges across the nation – for National Career and Technical Education Letter of Intent Signing Day on Feb. 16.  It was modeled after the NCAA’s National Signing Day for high school athletes signing letters of intent to play sports at the colleges and universities of their choice, held this year on Feb. 1. CTE Letter of Intent Signing Day honors students choosing to enroll in technical colleges to further their educations.

Like their classmates signing to become college student athletes, these students took their places behind tables in front of audiences at ceremonies on the TCAT campuses during brief excused absences from their high schools. Their families attend, along with area business, industry and civic leaders, and the schools’ corporate partners invited to show their support and provide information about potential careers.

While there isn’t the suspense of which college team the student athlete will choose, there is all the excitement as these students declare their intent to pursue a college education in any number of technical career fields and earn their certificates, diplomas or degrees.

That excitement was visible at Thursday’s ceremonies – in the smiles of students and eyes of their parents, brothers, sisters and friends. By starting the process of earning their postsecondary credentials, the students will become the next generation of professionals in their fields. And they’re helping fulfill Tennessee’s “Drive to 55” public policy agenda: 55 percent of working-age Tennesseans having some form of post-high-school professional certificate, diploma or degree by 2025.

“This is a great opportunity to engage students in career and technical education and the preparation for a fulfilling career, as well as, celebrating the dignity of wok through technical education,” said Tennessee Board of Regents Vice Chancellor James D. King, who heads the TCAT system. King participated in the Signing Day events at TCAT-Murfreesboro’s gleaming new Smyrna Campus/Nissan Training Center.

Tennessee Veterans Services Commissioner Many-Bears Grinder also attended the Smyrna ceremony, standing with students on the stage while they signed.  Members of the Board of Regents, other TBR staffers, several Tennessee Higher Education Commission leaders and other state officials participated in events at other TCAT campuses.

At Smyrna, students and their families enjoyed a pizza and cookie reception after the signing and were given TCAT t-shirts.

The letters of intent are non-binding on the students but signify that their Tennessee College of Applied Technology is reserving a place for them after their high school graduation this spring. They’re asked to notify the college if they change their minds. TCATs operate on a trimester schedule, with Spring, Summer and Fall trimesters.

At the Smyrna celebration, students were invited to the signing table in small groups according to their planned fields of study, giving them a chance to make new friends they may share classrooms with this summer or fall.

And the state has several financial aid programs that offer TCAT enrollment free of tuition and mandatory fees, including Tennessee Promise, Tennessee Reconnect and the Wilder-Naifeh Technical Skills Grants.

Across the state at TCAT-Elizabethton, welding was the most popular program of study for students who signed up there. Students from 10 high schools in Carter, Johnson, Sullivan, Unicoi and Washington Counties were invited to participate. Of the 70 who did, 21 signed up for welding, 12 for electricity/electronics and 33 for several other programs.

John Lee, NC3 certified instructor and the event coordinator at TCAT-Elizabethton, said he was pleased with the ceremony there, the second at his college.

TCAT-Elizabethton Director Dean Blevins said, “By signing incoming students to Letters of Intent, we let them know that technical education will prepare them for a strong career."