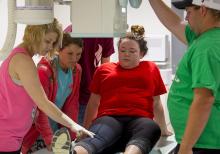 Students in Jackson State’s Radiologic Technology Program achieved a 100 percent pass rate in the most recent semester, a testament to the program’s longevity and success.

Each of the 21 students who finished the program in August passed the national certification exam on his or her first attempt. The program has produced a 100 percent pass rate on first attempt in six of the last eight years.

“We strive for 100 percent every year,” said Kim Benson, program director and associate professor of radiography. “It says to a prospective student that the program is doing what it is designed to do. It is teaching you the skills you need to become an entry-level radiographer.”

Success can be attributed to the program’s faculty, hospital affiliations, and the instructors and technologists who work beside students for more than 1,700 of their required clinical hours.

Students also work hard to pass the certification exam on the first attempt so they can begin their careers.

“The students realize this is their chosen profession and therefore they work diligently to succeed,” Benson said.

When Jackson State’s Radiologic Technology Program began in 1969, it was the first college-based associate degree radiography program in Tennessee and only the third in the United States. It was formed to meet a growing need of X-ray technologists to serve West Tennessee. At the time, most people in the profession worked in larger cities.

The program has consistently produced competent graduates who remain in the area as part of the healthcare workforce. And last year, students moved into the new Jim and Janet Ayers Center for Health Sciences, which has new equipment with the latest technology that mirrors what students will use in the workplace.

“It has made a world of difference,” Benson said. “They’re going to be well prepared in the workforce because of the equipment we have here.”

The success of radiography students at Jackson State is not uncommon in other programs. In 2017, every student who graduated from the school’s nursing program passed the National Council Licensure Examination on his or her first attempt. The achievement earned praise from the Tennessee Board of Nursing.