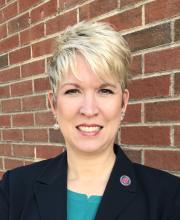 The Tennessee Board of Regents today appointed Laura Monks as the new president of the Tennessee College of Applied Technology – Shelbyville. Monks has served as interim president since former president Ivan Jones retired Sept. 1; her appointment as president is effective Nov. 1.

Monks joined TCAT-Shelbyville in March 2016 as assistant director following a 22-year career at Motlow State Community College. As assistant director, she helped the director in planning, organizing, coordinating and directing the technical college’s programs and operations. She also organized the college’s first student government association and served as the lead member of its reaccreditation committee and as the primary student advisor for SkillsUSA.

In a special conference-call meeting, the Board of Regents voted unanimously to approve TBR Chancellor Flora W. Tydings’ recommendation of Monks as president. Her recommendation followed a three-month search that included review of 38 candidates who applied after the position was posted in July. The search advisory committee was chaired by Regent MaryLou Apple and included representatives of TCAT-Shelbyville’s faculty, staff, students and its general advisory committee, and community and industrial leaders. The Board appoints presidents of all the community and technical colleges in the system.

After describing the search process to the full board, Regent Apple said: “I concur with the chancellor’s recommendation and move to accept her recommendation for Ms. Laura Monks as the next president of TCAT-Shelbyville.”

Monks addressed the Board briefly after the vote. “I consider it an honor and a privilege to serve the students and communities in the Southern Middle Tennessee area. It is an exciting time to be in higher education and to impact lives for many generations,” she said.

Monks, who resides in Lincoln County, earned her Master of Education degree with a concentration on higher education administration and supervision and her Bachelor of Business Administration degree with a concentration on computer information systems and a minor in business administration, both from Middle Tennessee State University. She earned an Associate of Science degree in the university parallel track with an emphasis on business administration from Motlow State Community College. She is currently working on her Doctor of Education degree, in leadership and policy studies, at the University of Memphis Lambuth in Jackson.

“I am so excited to have Ms. Monks coming in to this position and I know that she’s going to do great things. I look forward to working very closely with” her, Tydings said.

Monks began her higher education career at Motlow in 1994 as a financial aid technician and later as a programmer and analyst. She moved into the college’s administration in 2005 as assistant director of student services. She was named director of Motlow’s Fayetteville Center in 2009, where she remained until 2015 when she returned to the college’s main campus in Moore County as dean of students and director of athletics. She moved to TCAT-Shelbyville in 2016 as assistant director.

She succeeds Ivan Jones, who served 17 years as president of TCAT-Shelbyville and a total of 30 years with TBR – the College System of Tennessee. The Board of Regents honored him and his service at its last quarterly meeting in September.

The Tennessee College of Applied Technology – Shelbyville offers programs leading to certificates or diplomas in 15 high-demand fields, from administrative office technology, automotive technology and computer information technology to practical nursing, truck driving and welding. In addition to the main Shelbyville campus, it has teaching sites in Fayetteville, Lewisburg, Tullahoma and Winchester and at the Middle Tennessee Education Center in Shelbyville, which is jointly operated by Middle Tennessee State University, Motlow State Community College and TCAT-Shelbyville.