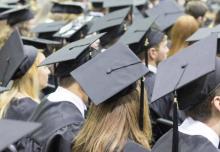 Students who earned a degree, certificate or other credential from Tennessee’s public community and technical colleges in the 2016-17 academic year are projected to earn a total of $940.7 million annually during their working careers – about $224.2 million more each year than they would without a postsecondary credential, according to a new economic impact study by the Center for Economic Research in Tennessee.

The study also found that the 40 community and technical colleges comprising the College System of Tennessee supported 9,950 direct, indirect and induced jobs in the state, generated $615.7 million in income for Tennessee workers and produced an overall economic output of $1.06 billion for the state during the 2016-17 academic year.

As part of its commitment to student success and workforce development, the Tennessee Board of Regents asked the Center for Economic Research in Tennessee (CERT) at the state Department of Economic and Community Development to conduct the study in order to better understand the economic impacts the College System and its graduates have on Tennessee and its residents. Governed by the Board of Regents, the College System’s 13 community colleges and 27 Tennessee Colleges of Applied Technology (TCATs) operate at over 200 teaching locations across the state. The study was presented at the Board of Regents’ quarterly meeting Friday at Cleveland State Community College .

“Tennesseans instinctively know the value of higher education to their quality of life and to our state. This study underscores the significant contributions of our colleges to the state’s economy and the earning potential of Tennesseans,” said TBR Chancellor Flora W. Tydings. “Our colleges also have a significant impact on their regional economies – supporting employment, incomes, spending, economic output and tax revenues across the state.”

Tennessee Department of Economic and Community Development Commissioner Bob Rolfe agreed. “Tennessee has always put a major emphasis on education including the importance of our community and technical colleges. Tennesseans earning a degree, diploma or certificate will be better equipped for continued success. This study showcases just how important the education system is for the residents of our state and will help Tennesseans continue to grow and excel here,” the commissioner said.

Key findings of the study include:

The report also cited increases in state and local tax revenue as a result of economic activity associated with system’s institutions. In addition, the CERT researchers said, “studies have shown that greater educational achievement in the labor force produces more economic activity in a region, spurs innovation and business development, and improves the quality of life for residents.”

The full report is available on the TBR website at https://www.tbr.edu/policy-strategy/office-policy-and-strategy  and the Department of Economic and Community Development website at: https://tnecd.com/research-and-data/publications/