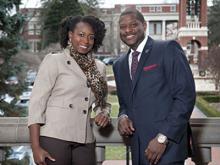 Created in 1993, the SREB-State Doctoral Scholars Program is designed to produce more minority Ph.D. students who seek careers as faculty on college campuses.  It provides multiple layers of support, including financial assistance, academic/research funding, career counseling and job postings, scholar counseling and advocacy, a scholar directory for networking and recruiting, invitation to the annual Institute on Teaching and Mentoring, and continued early career support.

Both Gaines and Stevens are third-year doctoral candidates in public health, concentrating in epidemiology.

Gaines, who is from Albany, Ga., holds a bachelor’s degree in biology from Tuskegee (Ala.) University and a master’s degree in public health from Mercer University, Macon, Ga.  During her time at Mercer, she worked full time as an HIV clinical research coordinator at the Mercer Medicine Clinic.  Her interest in HIV prevention, treatment and education continues, and she currently works with organizations such as the HIV Network and HIV education programs at ETSU.

During the summer of 2013, Gaines completed a field practicum with Project HOPE UK in Munsieville, South Africa, where she initiated a teen HIV prevention program.  In 2014, she assisted the Unicoi County Economic Development Board in Erwin in the development of a community grant to prevent obesity and also presented her research, titled “The Analysis of Condom Use Compared to Risk Factors Associated with Dating Violence and Bullying in High School Students,” at the National STD Prevention Conference hosted by the Centers for Disease Control.

Gaines is currently working on her dissertation, “The Influence of Race and Gender on HIV Risk Behaviors in High School Students in the Southern States of the United States.”  After completing her doctoral program in 2015, she hopes to obtain a fellowship focused on HIV prevention.

Stevens, a native of Patterson, La., graduated from Nicholls State University in Thibodaux, La., with his bachelor of science degree in microbiology.  He continued his education at East Carolina University in Greenville, N.C., where he obtained his master of public health degree and Ethnic Rural Health Disparities certificate in 2012.  There, he was also inducted into Omicron Delta Kappa and Sigma Xi honor societies.

Stevens is currently active in several organizations at ETSU, including Kappa Alpha Psi Fraternity Inc., the American Public Health Association (APHA) and the Society for the Analysis of African American Public Health Issues.  In 2013, he received a Golden Key Research Grant, and earlier this year, he was selected as an APHA Maternal and Child Health Section Senior Fellow.

His research interests include health disparities, minority health, and maternal and child health.  He plans to graduate in May 2015 and begin an applied epidemiology post-doctoral fellowship.

The SREB, a nonprofit, nonpartisan organization headquartered in Atlanta, works with 16 member states to improve public education at every level, from pre-K through Ph.D.  Its work is funded by member appropriations and by grants and contracts from foundations and local, state and federal agencies.

To date, the SREB-State Doctoral Scholars Program has more than 700 graduates, 80 of whom have earned tenure.  It enjoys a high faculty employment rate, with most graduates serving on campuses as faculty, administrators and post-doctoral researchers.  Most of these are employed in the SREB states of Alabama, Arkansas, Delaware, Florida, Georgia, Kentucky, Louisiana, Maryland, Mississippi, North Carolina, Oklahoma, South Carolina, Tennessee, Texas, Virginia and West Virginia.