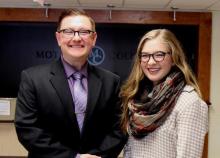 Motlow State Community College sophomore JuliAnna Dykes of Tullahoma was recently recognized as the National Collegiate Honors Council (NCHC) "Student of the Year" at the NCHC national conference in Seattle.

Every year the NCHC awards one student from a four-year and one from a two-year institution. Dykes is the third Motlow honors student in as many years to receive the NCHC "Student of the Year" award.

The award is presented to honors students who have made an impact on their school's honors program, and who have participated in honors at the regional and/or national level. The NCHC Student of the Year award is the only NCHC award designed, judged, and presented by honors students.

As part of his letter of recommendation for Dykes to the NCHC for the award, Dr. Scott Cook, Motlow's vice president for quality assurance and performance funding, and honors program director at the school, wrote that "Ms. Dykes is a self-directed learner who approaches her work with a stunning curiosity that leads to diligence, determination, and excellence, always surpassing my expectations. In the classroom her poise, confidence, academic knowledge, and abilities to think critically about complex problems and diverse civilizations has impressed me incredibly.”

Dykes has been a part of the Student Government Association since she enrolled at Motlow, and she currently serves as president of the SGA.

"From a cautious freshman to an involved, confident, and passionate student and advocate, working with Ms. Dykes has been one of the greatest joys of my career," Dr. Cook said. "She has left an indelible mark on the honors program and worked tirelessly to improve collegiate experience for her peers."

Dykes was also recently selected to serve on the Tennessee Higher Education Commission as a student representative, another prestigious honor.

She is a pre-medicine major who will graduate from Motlow in May 2017, when she plans to transfer to the University of Tennessee at Chattanooga -- and from there go on to medical school.

For more information about the honors program at Motlow, contact Dr. Scott Cook at scook@mscc.edu or 931-393-1738.