Students, presidents participate in College System's Day on the Hill 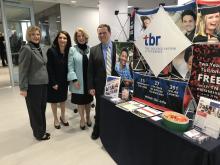 Dozens of students and college presidents from Tennessee’s community and technical colleges visited Capitol Hill in Nashville Tuesday, Feb. 13, for the College System of Tennessee’s first Day on the Hill.

The groups participated in a variety of activities revolving around learning the legislative process, providing leadership opportunities, honoring some of the college system’s best and brightest students and informing officials about the quality of the state’s public colleges and their programs. All of the College System’s 13 community college and 27 colleges of applied technology were represented.

In addition, personnel from the College System’s administration, the Tennessee Board of Regents’ system office, staffed an informational exhibit with pamphlets and brochures in a busy hallway in the historic, recently renovated Cordell Hull Building, the new home of the state legislature’s offices, committees and hearing rooms.

CST’s Day on the Hill was planned to coincide with the annual Phi Theta Kappa All-Tennessee Academic Team student recognition luncheon, the statewide Student Government Association Day on the Hill and a meeting of the system’s 40 community and technical college presidents.

After the special ceremony at the War Memorial Auditorium, the All-Academic team students toured the nearby State Capitol, where they were greeted by Gov. Bill Haslam and had a group photograph taken with him.

A separate group of student leaders – SGA presidents from across the system – also toured the Capitol, attended two legislative committee hearings on higher education and met individually with members of the House and Senate education committees and subcommittees.

“The purpose is to provide an educational opportunity for our SGA leaders to experience the legislative process first hand and share their personal higher education story with legislators,” said Dr. Heidi Leming, the College System’s vice chancellor for student success, who has led the SGA leaders to the Capitol for two years.

In addition, the system’s college presidents – who were already in Nashville for their semi-annual meeting at the system office – visited with individual legislators from their region to brief them on CST initiatives.

Tennessee Board of Regents Chancellor Flora W. Tydings also met with lawmakers and stopped by the College System’s colorful exhibit in the Cordell Hull Building.

“This has been a great way to showcase our colleges, our students and the great work they do,” the chancellor said. “Our community and technical colleges are the main vehicles in Tennessee’s Drive to 55 – delivering quality educations to more than 100,000 students a year. I’m looking forward to next year’s Day on the Hill.”

Drive to 55 is the state’s initiative to equip 55 percent of working-age Tennesseans with a college degree or technical certificate by 2025. Gov. Haslam, who introduced Drive to 55 in 2013, said in his State of the State address Jan. 29 that Tennessee is on a path to achieve that goal two years early.