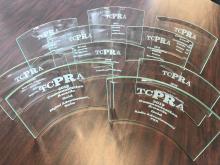 The College System of Tennessee’s Marketing and Digital Strategies team won nine awards from the Tennessee College Public Relations Association at their annual statewide conference May 24. TCPRA is an alliance of communicators and marketing that represents Tennessee's public and private colleges and universities.

The TCPRA Awards are presented for excellence in college marketing and communications. The System received two gold awards for its “Career in a Year” campaign, which highlights the many programs available at the state’s community and technical colleges that can provide entry into a new career in 12 months or less. The campaign launched in March 2019 and runs throughout the year.

The System’s inaugural SOAR Awards were recognized with a silver award in logo design, and bronze awards for poster and invitation design. The SOAR Awards, which were held in March 2019, was a two-day event during which the System recognized excellence among its students, faculty and staff.

In addition, Matthew Gann, Assistant Vice Chancellor for Marketing and Digital Strategy, was honored with the Otis Floyd Jr. Award for Excellence in Administration. The award is named in honor of the late former Chancellor for the Tennessee Board of Regents. Gann served as the TCPRA president for the past two years before stepping down at this year’s conference.

Awards were received in the following categories: