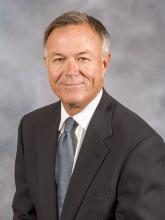 The Tennessee Board of Regents today appointed David Gregory acting chancellor for the State University and Community College System of Tennessee at the recommendation of Governor Bill Haslam, board chair.

Gregory, currently serving as TBR’s vice chancellor for Administration and Facilities Development, had previously announced his plan to retire at the end of January, but agreed to delay his departure for this role beginning Feb. 1.

“David Gregory is known by and respected by many for his years of service to the Tennessee Board of Regents and in many roles in state government,” said Haslam. “As a different governing structure around TBR and its institutions is being considered, I think it is important to have someone who is known by everyone in the system and knows state government very well. David will be a strong and steady hand as acting chancellor as we conduct the chancellor search. He has the character, the insight and the commitment to the system and will do an outstanding job.”

As vice chancellor, Gregory oversees government relations, institutional advancement and facilities development. In that role he speaks for the interests of TBR and its institutions as the key legislative liaison to the Tennessee General Assembly and represents the system to the executive branch of state government.

He coordinates the relationship between the TBR system office and member institutions for advancement, and oversees capital outlay and maintenance projects for the TBR’s 46 colleges and universities across the state.

As acting chancellor, Gregory will guide the TBR system in accordance with the board’s direction and manage the system office in Nashville until a search process is completed and new chancellor is selected.

“Higher education in Tennessee has an undeniable momentum today, thanks to the Governor’s Drive to 55 initiative, Tennessee Promise, the TBR’s completion efforts, and similar initiatives happening at every one of our public colleges and universities,” said Gregory.

“Other states are looking to Tennessee as the model for innovative thinking in the push to increase student success. I plan to be a steady hand during this transition to new leadership for the system, but one that continues to push for progress — to maintain but also build on the momentum we have going.”

The search for a new chancellor is expected to begin as more details become available concerning the Governor’s Focus on College and University Success proposal. The results of that effort will drive the criteria and timeline for the chancellor search, according to TBR Vice Chair Emily Reynolds. Gregory has agreed to remain acting chancellor until the search is complete.

A veteran public administrator, Gregory joined the TBR in May of 1998 after serving as director of government affairs for Blue Cross Blue Shield for three years. He held leadership positions in state government for 15 years prior, including terms as chief of staff for Governor Ned McWherter and chief of staff for Lieutenant Governor John Wilder. He is a graduate of Lipscomb University.

In other action, the board approved the search criteria for a new president at Walters State Community College. President Wade McCamey previously announced his retirement effective June 30. The search committee will be announced at a later date.