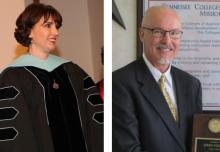 The Tennessee Board of Regents approved the selection of Jerry Young as the new director for the Tennessee College of Applied Technology - Crossville and Arrita Summers as the new leader for the TCAT - Dickson.

The Board convened a special called meeting at 1 p.m. CST Nov. 25 to act upon a recommendation to approve the two new college directors.

Both candidates are familiar faces in the TCAT System. Young has served as assistant director of the Crossville TCAT since 2005 and stepped into the interim director role when the previous director retired in September. Summers has been director of the TCAT – Crump since October 2012.

“We are fortunate to have excellent candidates available for these important leadership roles,” said TBR Chancellor John Morgan. “The work both Mr. Young and Dr. Summers have done on their campuses has been influential and significant, which made their selection opportune. Both have expressed their commitment to student success, and we expect to see that commitment reflected in their leadership.”

Young’s previous responsibilities include the fiscal and purchasing operations of the TCAT campus as well as the facilities, computer technology, and workforce development operations, among others. Prior to his assistant director role, Young was a senior teacher in the Electronics Technology program for 17 years. He also spent time in the U.S. Navy and as a field service engineer before joining the TCAT – Crossville.

Young holds a master’s degree from the University of the Cumberlands in Kentucky, a bachelor of science degree from Excelsior College in New York, and an electronics technician certification from the Great Lakes (IL) Naval Training Center. He will transition into the permanent director role immediately.

Summers is returning to the place she began her career, the TCAT – Dickson. She joined the college as a Cosmetology faculty member in 1994 and eventually held administrative positions with increasing responsibility. She was selected as the recruiting coordinator and then the extension campus coordinator until she moved on to the TCAT – Nashville in 2010.

Summers served as the assistant director of the TCAT – Nashville before being selected to lead the college in Crump in 2012. Her experience as director included similar responsibilities expected on the Dickson campus: serving as chief administrative officer of the college and holding responsibility for all aspects of the campus administration, including academics, employment and accreditation standards.

Summers earned the educational doctorate degree in 2013, educational specialist degree in 2011, and a master of educational administration and supervision in 2007, all from Tennessee State University. She holds the bachelor’s degree in management and organizational development from Bethel College, an associate of applied science from Volunteer State Community College, and a certificate of instructor training from the Tennessee Technology Center in Paris.

Summers will assume her role at the TCAT – Dickson in January. The college’s previous director retired in August.

“Both newly appointed directors have 46 years of combined service to the TCAT System, and both began their careers in the classroom and have been promoted through the ranks,” said James King, vice chancellor for the Tennessee Colleges of Applied Technology. “They will serve their institutions well with vision and passion for continuing to make the TCAT System the premier provider for the workforce development. I am confident their institutions will continue to thrive under their outstanding leadership and dedication.”