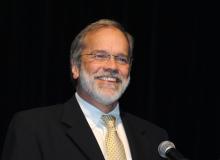 TBR Chancellor John Morgan was among more than 200 college and university leaders from 33 states — including nearly two dozen postsecondary systems with a combined enrollment of more than three million students — today announced the launch of a new coalition that will serve as a vehicle for mobilizing higher ed leaders supporting Common Core State Standards.

Representatives from major college and university systems announced the coalition, Higher Ed for Higher Standards, in a press conference today. Postsecondary leaders view the Common Core State Standards as a key strategy for improving student success. The coalition can be found on the Web: higheredforhigherstandards.org.

“This is a call to action and I urge my colleagues in higher education to stand up and make their voices heard on Common Core,” said Nancy Zimpher, chancellor of the State University of New York and chair of the National Association of System Heads (NASH). “Our coalition of higher education leaders will work with our K-12 partners and state policy makers to ensure the full implementation of the Common Core.”

Zimpher added: “These Standards are good for our students, our states and our country. We must have students that are college- and career-ready in order for the United States to continue to compete and win in the 21st Century global economy.”

Among other policy positions, Higher Ed for Higher Standards believes the Common Core State Standards can help colleges and universities in their efforts to reduce remediation rates and improve student success.

“Remediation slows down student progress and, in some cases, puts a halt to the college experience,” said John Morgan, chancellor of the Tennessee Board of Regents and vice chair of NASH. “Colleges and universities have been working hard to address remediation challenges. We believe the Common Core standards, with their focus on critical thinking and problem solving, can help improve student success."

The Higher Ed for Higher Standards coalition is based on three principles:

Every state should insist on K-12 academic standards that adequately prepare students for college and careers so that every young person has the opportunity to pursue postsecondary education, or quality training and careers, after high school. The Common Core State Standards were developed by states to serve this goal and represent a significant improvement over most states’ previous standards.
New assessments aligned to the Common Core standards are equally critical. States’ current high school tests do not adequately measure whether students have mastered the new, higher standards. More sophisticated assessment instruments are necessary to provide better feedback to teachers, parents and students, and offer more meaningful information to colleges on students’ postsecondary preparation.
Higher education has a clear and compelling stake in this debate. Effective implementation of the Common Core State Standards and aligned assessments is an important step toward improving college readiness, reducing remediation rates and improving completion rates in two- and four-year institutions and job-training programs.

Looking ahead, Higher Ed for Higher Standards members across the states have committed to helping raise public awareness about the importance of the standards and making their voices heard with state policymakers, urging them to stay the course on career- and college-ready expectations.

Higher Ed for Higher Standards is a project of the Collaborative for Student Success, a grant-making initiative created with the pooled resources of a diverse group of regional and national education foundations committed to improving public education. On the Web: forstudentsuccess.org.