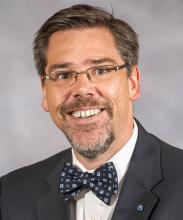 Dr. Tristan Denley, vice chancellor for academic affairs at the Tennessee Board of Regents, has received the prestigious Newel Perry Award for 2016 from the National Federation of the Blind for his work in making accessibility for all students a priority in Tennessee higher education programs.

The Newel Perry Award is the highest honor that NFB bestows on persons outside of the federation who have worked with it to achieve accessibility and opportunity for the blind and low-vision community.  It was first given in 1955 and is named for the late mathematics professor and administrator at the California School for the Blind who was an early leader in the civil rights movement for the blind.

For the last year and a half, Denley has led an ongoing initiative to make learning resources across the TBR system, especially digital resources, accessible to all students regardless of their disabilities.  That effort enables the use of technology that “reads” digital material aloud to blind and low-vision students, allows students to convert digital material to braille, and provides closed captioning for hearing impaired students. Last year, nearly 2,000 people across the TBR system received training to work with accessible learning resources, including special training for professors and other instructors who teach online classes.

Denley said the work thus far is only the start.  “I’m very humbled to receive this recognition. As a system we have taken some very important first steps thanks to the hard work of many people across TBR institutions. I hope that this award will help raise awareness of the true impact of their efforts, and encourage us in the work ahead,” he said.

The award was presented at the NFB’s annual convention earlier this month in Orlando by NFB President Mark A. Riccobono, who said: “A systemic approach to the accessibility of educational content, rather than treating accessibility as a mere accommodation or afterthought, is the best way to ensure that all students benefit from their higher education experience.  Dr. Denley understands this and has implemented a system-wide approach to accessibility that is a model for other higher education institutions.

“It is fitting that he has received our Newel Perry award, because Dr. Perry had an outstanding academic career and was a lifelong educator of blind students and a fierce advocate for their full and equal access to education at all levels. The National Federation of the Blind is pleased to honor and commend Dr. Denley's groundbreaking work with one of our highest awards,” Riccobono said.

Denley was nominated for the national award by James Brown, president of the National Federation of the Blind’s Tennessee chapter.  “Blind students in Tennessee are too often left out of an authentic educational experience. There are plenty of people in higher education who talk about providing a topnotch education to all, but the difference between many of those people and Dr. Denley, is that he actually means it.  That is why I personally nominated him for this prestigious award,” Brown said.