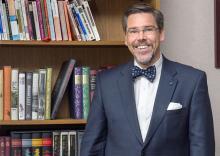 Dr. Tristan Denley, vice chancellor for academic affairs at the Tennessee Board of Regents, has been named one of five U.S. “higher education leaders to watch in 2017 (and beyond)” by the online publication Education Dive.

Denley is the only university system administrator on the list. The other four are chancellors and presidents of colleges and universities, including Harvard University President Drew Faust.

The Education Dive article, written by its editor Autumn A. Arnett, says the five leaders are “experts at doing more with less and bridging divides in academe…(and) are shaking up the industry. These five leaders in higher education are not only getting the job done, but re-imagining the model of what a successful college president is to be.”

The article cites Denley’s work on initiatives to improve student success, particularly among first-generation college students and underrepresented minorities – programs aimed at keeping them in school, on a path to graduation and earning degrees. The TBR initiatives include co-requisite remediation, which lets students take credit-bearing courses while receiving non-credit learning supports they need in the same subjects, and “architected choice” and guided pathways, which require students who don’t choose a major when entering college to choose one of nine broad areas of study that allow them to work toward degrees in their area of interest while deciding on specific majors.

“Denley is often credited for the transformative approach to remedial education in (Tennessee’s) higher education system. In the state, developmental courses are taken concurrently with credit-bearing courses, which has boosted completion rates tremendously. Something of an innovator of growth mindset at the collegiate level, Denley believes that a co-requisite model makes students believe they belong in college, and therefore encourages them to enroll and persist despite challenges in preparedness levels,” Education Dive says.

“In addition to re-imaging remediation, Denley has been laser focused on identifying and removing the barriers which prevent students from completing college. For example, he developed an analytics-based program which recognized that putting off declaring a major could decrease the likelihood of completion, and sought to pair students with courses that matched their interests and abilities to make individualized recommendations about which programs to pursue,” the article concluded.

Education Dive provides online news, trends, job listings and resources for educators and administrators in K-12 and higher education.  Arnett has contributed articles – largely around issues of diversity and access in higher education -- to a number of publications, including The Atlantic.

The Education Dive designation is the fifth major national recognition in six months for Denley. In September, the Washington Monthly named him one of “The Sixteen Most Innovative People in Higher Education,” an article that also cited his innovative work in transforming how Tennessee’s community colleges provide remedial education in ways that significantly improve student success. “Tennessee has become a national leader in improving remediation…and Denley has had a lot to do with it,” Washington Monthly said.

He was the focus of a December profile article in Educause Review, “Tristan Denley: Building Smart Pathways for Student Success.” In October, he was one of two TBR leaders listed among the “Top 30 Technologists, Transformers and Trailblazers for 2016” by the Center for Digital Education. And in July, Denley received the prestigious Newel Perry Award for 2016 by the National Federation for the Blind for his work in making accessibility for all students a priority in Tennessee higher education programs.

"It’s certainly an honor to be named among this extraordinary group,” Denley said. “I think it is wonderful that this designation brings well deserved recognition to the cutting edge work that our system is achieving together.”

TBR Chancellor David Gregory said, “Every honor and accolade that comes Dr. Denley’s way is a result of his hard work on behalf of students. At TBR, we have always known him as innovator but we’re still proud of Education Dive’s recognition of him.”