Tennessee’s community and technical colleges honor veterans, including 39 recipients of the Chancellor’s Commendation for Military Veterans for 2022

Tennessee’s community and technical colleges are honoring veterans on their campuses – students, faculty, staff and alumni – in Veterans Day activities this week. One veteran at each college will be awarded the Chancellor’s Commendation for Military Veterans, a special recognition launched three years ago by Tennessee Board of Regents Chancellor Flora W. Tydings.

The Chancellor’s Commendation is conferred in the form of a specially commissioned challenge coin featuring the military branches on one side and the Chancellor’s Commendation designation on the other. Challenge coins have a long tradition in all military branches, awarded by commanders in recognition of special achievement, excellence, hard work, unit pride, respect and esprit de corps.

The honorees are nominated by their college president. Presidents may nominate a student,  member of the faculty or staff, or an alumnus who are veterans or active-service members and who exemplify characteristics of honor, courage, commitment, integrity, duty, respect, discipline and sacrifice. Presidents describe how their nominees demonstrate those traits and how they embody values of the College System of Tennessee, such as commitment to student success, service to campus and community, courage in adversity, and academic excellence.

“Our college communities are strengthened by the presence of veterans and active-duty personnel – as students, faculty, staff and alumni,” Dr. Tydings said. “They – and the experience and perspective they bring – are an important part of the broad diversity of people and backgrounds on our campuses that benefits everyone.

“We are committed to serving them as they served our country. It’s a privilege to honor them, not only on Veterans Day but all year. I thank our presidents, our faculty and our entire campus communities for their work in ensuring that veterans are served and welcomed,” the chancellor said.

At Motlow State Community College, President Michael Torrence presented the Commendation to Jamie Roper, a Motlow student and U.S. Marine Corps corporal. “I always knew I wanted to be a part of something larger than myself,” said Roper, who served four years as a Chemical, Biological, Radiological, Nuclear (CBRN) Defense Specialist. “Being able to attend a college close to home was one reason I chose Motlow. The College provided me the opportunity to pursue a higher level of education without having to go into debt with tuition being affordable.” 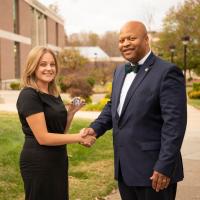 Roper began her education at Motlow in Fall 2021 and plans to graduate next spring. After college, she wants to become a Veterans Affairs counselor.

The College System's commitment to veterans is underscored by the system’s active participation in the state’s VETS Campus program. All 13 community colleges in the system are now certified VETS Campuses, which means they prioritize outreach to veterans, allocate resources for their successful transition from military service to college, and successfully deliver services that create a supportive environment where student veterans can prosper while pursuing their education.

Two of the system’s technical colleges – the Tennessee Colleges of Applied Technology at Chattanooga and Dickson – have also earned VETS Campus certification, and the others are working toward earning certification, said Dr. Robert M. Denn, TBR associate vice chancellor and veterans services officer.

The VETS Campus program was established by the Tennessee Veterans Education Transition Support (VETS) Act enacted by the Tennessee General Assembly in 2014. The statute details a rigorous set of seven requirements that colleges and universities must meet to earn VETS Campus certification. The Tennessee Higher Education Commission administers the program, awards the certifications and annually reviews compliance with the requirements.

The 2022 Chancellor’s Commendation for Military Veterans honorees, their association with the college, and their military branches are:

Information on resources for veterans interested in pursuing their education, including the complete list of approved VETS Campuses, is available at https://www.tn.gov/thec/veteran.html

Additional information on financial assistance, academic credit for military training and experience and other resources for veterans is available at https://www.tbr.edu/student-success/veterans-and-military-families-support