Tennessee’s Community Colleges awarded a record number of 15,874 degrees and technical certificates during the 2019-20 academic year – a 44 percent increase from a decade ago. The previous high was 15,240 two years ago.

In addition, the Tennessee Colleges of Applied Technology awarded 7,124 diplomas and technical certificates – for a total of 22,998 credentials awarded across the system – according to preliminary data reported today at the Tennessee Board of Regents quarterly meeting. The board governs the 13 community colleges and 27 TCATs comprising the College System of Tennessee.

“We are awarding more degrees, in a declining enrollment environment,” Chancellor Flora W. Tydings said. “We still have considerable work to do in closing the achievement gaps that exist among some of our underrepresented minority students – and that’s a major focus across our system.

“But overall, we are on track to meet our Drive to 55 awards goals, which were raised even higher for our system a couple of years ago because we were easily exceeding the original goals set for us in 2013,” Dr. Tydings said. 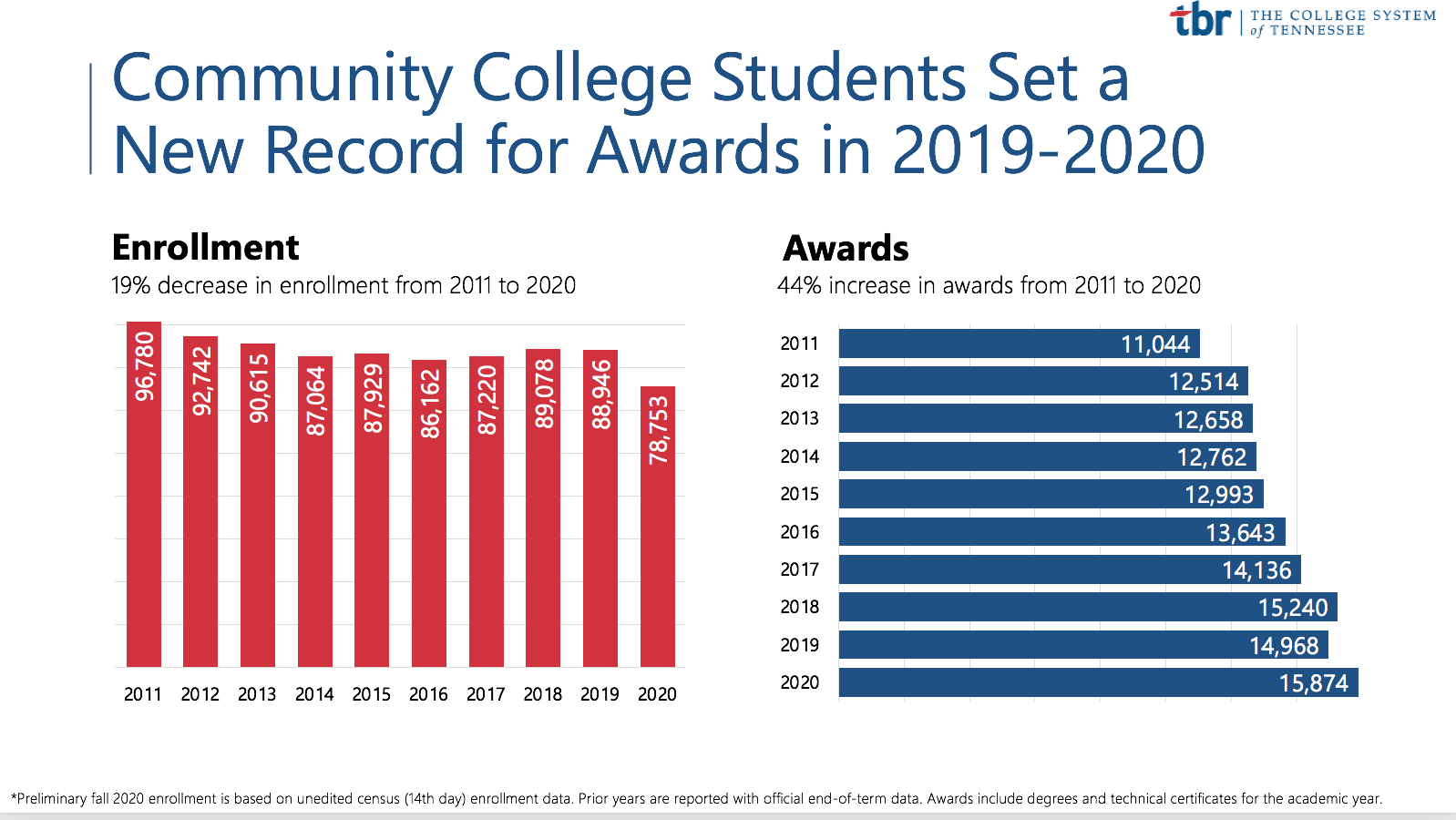 The board also received the system’s enrollment report for the current fall term. Enrollment at the community colleges totals 78,753 – an 11.5 percent decline from fall 2019. The declines reflect a national trend at community colleges in this pandemic year.

At the TCATs, however, preliminary data shows 10,772 students have registered this fall, a 3 percent increase from the same time last fall. (The technical colleges start their fall terms later than the community colleges; their enrollment and awards data are still preliminary.)

The enrollment decline at the community colleges is virtually across the board: enrollment of first-time, full-time freshmen dropped 19 percent (but enrollment of Tennessee Promise students dropped only 6 percent), adults (25 and older) declined 13 percent, and high school students dual-enrolled in college courses declined 9 percent.

Dual enrollment numbers had been expected to decline even more than they actually did due to many high schools across the state opening their school year with mostly online classes. Despite that, the number of dual enrollment students increased at some community colleges.

Further research is expected to reveal more reasons for the overall decline, but one possibility for a larger decline in adult enrollment is that many remain at home with children engaged in online learning as a result of the pandemic. According to the 2019 Community College Survey of Student Engagement at TBR colleges, 77 percent of students work while enrolled and 52 percent of students are responsible for the care of dependents. And 28 percent of students said that caring for dependents would make them more likely to withdraw from college.

The board also received an update on apprenticeship programs during a meeting of its Workforce Development Committee on Tuesday. Registered apprenticeship programs, which operate under U.S. Department of Labor guidelines, are partnerships with businesses and industries that provide paid employment and workforce training for student employees at the same time. They are a rising component of the system’s workforce training mission.

Currently, eight community colleges and eight technical colleges in the system have registered apprenticeship programs, in partnership with 32 employers, with 265 of their employees attending classes and working as active apprentices. Construction is currently the primary sector for apprenticeships; other major ones include information technology, advanced manufacturing, health care, and tourism.

The Board of Regents also approved six new or revised programs at the TCATs, to be more responsive to the needs of students, business and industry. They include:

The board’s standing committees met Tuesday and the full Board of Regents meeting was today, all by teleconference due to the pandemic. All the meetings were streamed and are archived on the TBR website at https://www.tbr.edu/board/september-2020-quarterly-meeting.  Complete, detailed committee and board agendas, meeting material and reports are also posted at that link.