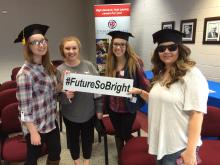 Tennessee Promise students are outperforming their peers at community colleges in their persistence and completion rates, and other success measures, according to data presented to the Tennessee Board of Regents today.

The first class of Tennessee Promise students entered college in the fall of 2015. After four semesters – through the spring 2017 semester – 56.2 percent of the first class of Promise students are either still enrolled, have earned a college credential, or transferred to a four-year university. That compares to 38.9 percent of their peers (first-time freshmen at community colleges that fall who were also recent high school graduates but did not take part in the Promise program) – a 17.3 percentage point difference.

Tennessee Promise provides students up to five semesters of tuition-free attendance at a community college or college of applied technology. These results through four semesters indicate that the program has accelerated college enrollment, encouraged more full-time enrollment (an important indicator of student success), and accelerated award rates (degrees or other program certifications), according to Dr. Russ Deaton, TBR executive vice chancellor for academic affairs and student success.

He presented the data to the Board of Regents during its quarterly meeting in Memphis. The board governs the College System of Tennessee, the state’s 13 community colleges and 27 colleges of applied technology. The analysis of the first TN Promise cohort covers the students’ performance through their first four semesters. More complete data for the first Promise class will be available in January after the students complete their fifth and final semester of eligibility this fall.

“These numbers are the first evidence that Tennessee Promise is doing exactly what Governor Haslam and the General Assembly designed – getting more students into college, including students who might not otherwise be able attend, and helping them succeed once they get here,” said TBR Chancellor Flora W. Tydings. “It’s a visionary program that other states are beginning to emulate. We look forward to the fifth semester results on the first class of TN Promise students in January.”

Proposed by Gov. Bill Haslam and approved by the state legislature, Tennessee Promise is the nation’s first statewide program for tuition-free community and technical college. The program provides mentoring assistance to help guide high school students through the college application and enrollment process and a “last-dollar” scholarship covering the costs of tuition and mandatory fees not covered by federal Pell Grants and state aid programs such as the Hope Scholarship and Tennessee Student Assistance Awards.

A total of 13,287 Promise students enrolled in the state’s 13 community colleges in the fall of 2015, 73.5 percent of recent high school graduates who entered as first-time freshmen in the colleges that fall. Of the Promise students, 59.9 percent were still in college a year later, in fall 2016, compared to only 41.3 percent of non-Promise recent high school graduates.

The preliminary data also indicates that of the students who entered in the fall of 2015 and were still enrolled in spring 2017, 16 percent of the Promise students had earned 60 or more hours of college credit – the standard for earning an Associate degree -- and 42 percent had earned 48 to 59 hours, putting them within striking distance of a degree, Deaton said.

Chancellor Tydings told the board that she asked the colleges this week to contact Promise students nearing the end of their eligibility to encourage them to complete their work toward an Associate degree or certificate this fall if possible. “These students are within sight of completion and we want them to cross the finish line,” Tydings said. “From there, they may choose to continue their studies at a four-year school, or enter the workforce with their new credential. Whichever route they choose, we want them to succeed.”