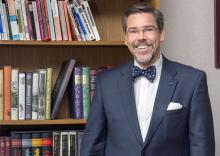 Dr. Tristan Denley, vice chancellor for academic affairs at the Tennessee Board of Regents, has been named one of “The Sixteen Most Innovative People in Higher Education” by the Washington Monthly, a respected independent magazine that focuses on improving government and public institutions.

“Tennessee has become a national leader in improving remediation…and Denley has had a lot to do with it,” the Washington Monthly article says. It traces his work on the subject to his years as provost at Austin Peay State University. After success with the APSU experiment, Denley later, as vice chancellor for academic affairs at TBR, helped apply the new approach across Tennessee’s system of 13 community colleges.

The Board of Regents launched its co-requisite pilot program in 2014 with about 2,000 community college students. "The results were so staggering that the very next year, the model was implemented at every community college in the state, for every student in remediation. The expansion has been a wild success,” the article said, citing the results: “In its first year, 51 percent of co-requisite math students passed their credit-bearing math class in the fall semester — compared to the 12 percent who previously managed that in a full year. In English, the 30 percent number leapt to nearly 60 percent. In fact, more students are now completing credit-bearing classes than previously completed just the remedial courses.

“To Denley, that’s powerful proof of the role students’ mind-set plays in their success or failure. The failure of the old model may have a lot to do with the fact that it told students they didn’t belong at college—and they believed it,” Washington Monthly concluded.

Denley is the only official of a statewide university system administration, and the only Tennessean, on the magazine’s list. Others cited include administrators and educators at individual colleges and universities – including Stanford University, the University of Texas at Austin, Georgia Institute of Technology and the University of Virginia – and at national foundations and research and advocacy organizations such as Achieving the Dream, University Innovation Alliance, College Advising Corps and New America.

The magazine said that it created the list in order to "empower those still struggling to create change" by publicizing the work "of those who are already succeeding." It said the list isn't a ranking nor exhaustive but "a snapshot of the various overlapping ways in which creative, passionate people around the country are working to make higher education more accessible, affordable and effective."

Denley shared the recognition with faculty and staff across the TBR system who have helped implement the co-requisite model. “The article describes some wonderful work that is happening nationally. It is an honor to be chosen as part of this group. Certainly, none of the innovation across the Tennessee Board of Regents would be possible without the tremendously hard work of our faculty and staff,” he said after the article’s publication online Monday.

TBR Chancellor David Gregory noted that the Washington Monthly article is the second national recognition Denley has received just this summer. In July, the National Federation of the Blind awarded Denley its highest honor, the Newel Perry Award for 2016, for his work in making accessibility for all students a priority in Tennessee higher education.

“Dr. Denley deserves to be on anybody’s list of the most effective innovators in higher education and we at the Tennessee Board of Regents couldn’t be prouder of his recognition by Washington Monthly,” Gregory said. “The article cites his work on transforming remediation but he’s also a national leader in other student success innovations, including ‘guided pathways’ and ‘purpose first’ initiatives that that help students choose their degree programs earlier, dramatically improving their chances of graduating, and the revitalization of gateway courses with new ways of teaching.”

The Community College Research Center at Columbia University reported in April that co-requisite remediation is significantly more cost effective, cutting in half the cost to get a student through the first college-level math class, from $7,720 to $3,840. The cost for writing classes was cut 11 percent, from $3,750 to $3,350.