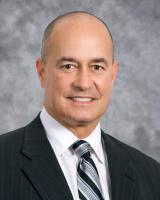 Miles Burdine was appointed to the Tennessee Board of Regents on December 14, 2017, by Governor Bill Haslam to fill the 1st congressional district seat and was reappointed for another six year term by Governor Bill Lee.

Burdine is a native of Kingsport, Tennessee, and is the President and CEO of the Kingsport Chamber of Commerce.  One of the chamber's main focus efforts under Burdine's leadership for many years has been education and workforce development.

He holds a Bachelor of Science degree in Business Administration from the University of Tennessee and is a graduate of the national management program for chamber of commerce executives, administered by the U.S. Chamber of Commerce.  His education also includes many military based efforts.

Burdine's "other" career is with the United States Marine Corps and United States Marine Corps Reserves.  Having served 30 years and now retired at the rank of Colonel, Burdine has extensive training and experience in war fighting, tactics, security, civil affairs and the challenges faced in the Middle East.  He has led, trained and served with units from countries such as Kenya, Iraq, France, Italy, Saudi Arabia, Spain, Turkey, Israel, Lebanon and England.  Three of his deployments have been to combat environments.

He is very active in his community and serves or has served in many leadership capacities with many community and state organizations.  Some of them include Board of Judical Conduct, Governor's First to the Top Advisory Council, Governor's Commission on Judicial Nominations, State Collaborative on Reforming Education, Governor's Energy Policy Task Force, Blue Cross Blue Shield of Tennessee Board of Directors, Tennesseans for Quality Early Education, Tennessee Economic Development Partnership Board and several other civic leadership roles.