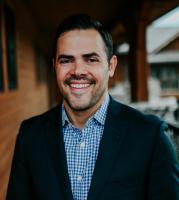 Weston Wamp was appointed to represent the 3rd congressional district on the Board of Regents by Gov. Bill Lee in September 2019.

As a member of the founding team of technology incubator Lamp Post Group and a co-founder and principal of Dynamo Fund, Wamp has played a significant role in Chattanooga’s transformation into a hub of innovation and entrepreneurism. After selling his interest in Dynamo Fund, he turned his attention to reforming America’s political system. Focusing on ethics reform, anti-corruption reform and election security, Wamp currently as senior political strategist for the nonpartisan organization Issue One.

In recent years, he has also served as an advisor and consultant to high growth national companies, leading communications, marketing and public affairs strategies on their behalf.

Wamp is a 2009 graduate of the University of Tennessee, Knoxville, earning a Bachelor of Arts in Communications Studies. He’s a member of the Chattanooga Young Life Committee and has chaired an annual fundraiser for Young Life for five consecutive years. He also formerly served as a member of the Board of Directors of the AIM Center, a Chattanooga nonprofit that offers employment, education, housing, socialization and wellness opportunities for adults living with serious mental illness.