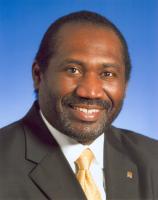 Greg Duckett was appointed to the Tennessee Board of Regents on July 14, 2006, representing Tennessee's ninth congressional district and was reappointed to serve a second six year term (2012-2018).

Duckett is Senior Vice President and Corporate Counsel with Baptist Memorial Health Care System.  Prior to joining the Baptist Memorial Health Care System in January of 1992, Duckett served as Chief Administrative Officer for the City of Memphis.  He served as Director of Memphis Housing and Community Development from 1988 to 1991.  He was state counsel to United States Senator Albert Gore, Jr., from 1985 to 1987.

He was selected to serve on the Clinton-Gore transition team, evaluating approximately 40 agencies as part of Housing and Urban Development and working on personnel issues.

Duckett holds a B.A. from Oberlin College and a Doctorate of Jurisprudence from the Memphis State University School of Law.