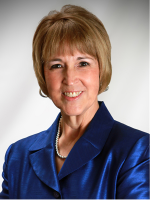 Dr. MaryLou Apple was appointed by Governor Bill Haslam to represent the 6th congressional district, completing the term recently vacated.  She has 37 years of service with the Tennessee Board of Regents system – first with Walters State Community College as an associate professor of nursing, dean, and eventually vice president for Academic Affairs, and later as president of Motlow State Community College (2006-2015).

During her presidency at Motlow State, she organized the Presidential Student Leadership Institute, initiated the Adult College Express, launched the Mechatronics Program, founded the Motlow Ladies Philanthropic Society and advocated for funding for new facilities at the McMinnville and Smyrna Centers.

Under Dr. Apple’s leadership, Motlow State was recognized as one of the 50 top community colleges and one of the fastest growing community colleges in the nation by Community College Week, and received the Excellence in Business Ovation Award from the Cumberland Business Journal in 2010 for the addition of the Mechatronics program.

Dr. Apple was awarded the prestigious Shirley B. Gordon Award of Distinction for 2012 from Phi Theta Kappa National Honor Society for providing extensive support and resources for Motlow’s PTK chapter, and was recognized by Murfreesboro Magazine as one of Ten Most Influential Business Women in Rutherford County in 2015 and by the Tullahoma Chamber for the 2015 Inaugural Women Impacting the Community for her work in education.

She was a Commissioner for the Southern Association of Colleges and Schools from 2011-2015, Chair of the Rotary International Tullahoma Noon Club Education Scholarship Committee from 2013-2015, member of the American City Bank board from 2006-2014, and currently serves as a member of the Motlow State Foundation Board of Trustees, Women in Higher Education in Tennessee, American Nurses Association, Tennessee Nurses Association, National Organization for Associate Degree Nursing and National Council of Instructional Administrators.